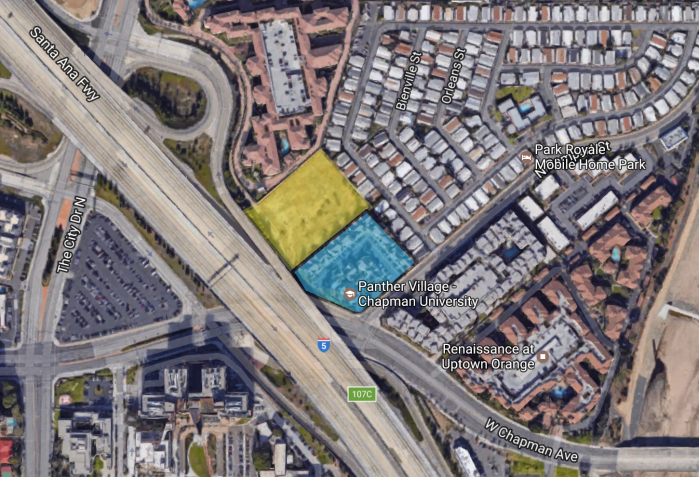 Chapman University wants to buy about two acres (shaded yellow) adjacent to the 5 Freeway and its Panther Village (shaded blue).

The Orange City Council unanimously voted Tuesday to approve a $6.5 million bid from Chapman University for a two-acre parcel next to the 5 Freeway at Chapman Avenue, potentially paving the way for a high-rise student housing project.

Mary Platt, a Chapman spokeswoman, wrote in an email that university officials will immediately start the City’s application process to use this property to build additional student housing.

“The University has been searching for a significant period of time for property outside the Old Towne Historical District on which to build student housing,” Platt wrote. “Once we learned of the property’s availability, we submitted a generous proposal because we recognized, through the work of the Neighborhood Advisory Committee, how important it was to provide additional student housing.”

Councilman Fred Whitaker wrote in an email that the sale is a great step toward Chapman’s goal of providing housing for 50 percent of its undergraduate students.

“Chapman really showed good faith to the community, by offering more than appraised value for the land to ensure that the deal got done,” Whitaker wrote.

Whitaker added that it will be a great addition to the adjacent Panther Village, which he argues is working well as an alternative to students leasing single-family homes around town.

“Im just happy that the University is going to purchase it and add it to Panther Village,” Alvarez said.

The Old Towne Preservation Association thanked Chapman for its quick acquisition of the property.

“The more housing the university provides, the less students are forced to rent rooms and apartments in private homes throughout Old Towne,” Jeff Frankel, chairman of OTPA’s preservation committee, wrote in an email. “The neighborhood has witnessed way too much disruption of its quality of life, including late night parties, loud noise, illegal parking, and other violations.”

The 2.58-acre parcel was obtained by the CalTrans for freeway expansion project. When the project was completed in the late 1990s, CalTrans designated the property as surplus and the Orange Redevelopment Agency purchased it for a future water well site.

City officials determined that only .44 acres will be needed for the well, leaving the remaining 2.14 acres available for sale and development. The property’s base appraisal was for $6 million but noted that its value could be reduced to $2.4 million because the project has no direct access from a public roadway.

Orange plans to use about $3.5 million from the property’s sale to build the proposed water well.

During a recent interview with The Foothills Sentry, Chapman President Emeritus Jim Doti recently said the University’s architects would not be bound by the same height restrictions they grapple with in Old Towne Orange.

“If we were able to acquire that land and get the go ahead we could finish that in two years,” Doti said.