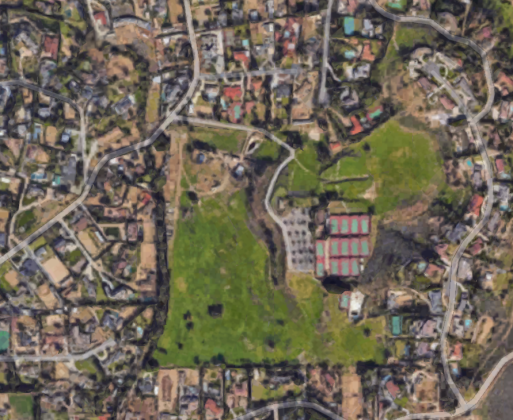 An aerial map shows the vacant Ridgeline County Club that was targeted for a 39-unit housing development.

The California Supreme Court on Thursday unanimously ruled in favor of a Orange residents opposing a controversial housing development in Orange Park Acres, ruling that the City erred in approving the project without a General Plan amendment.

The developer, Milan REI IV LLC, purchased the Ridgeline Country Club in 2006 and proposed a 39-unit residential development despite stiff opposition from neighbors. Orange Citizens for Parks and Recreation PAC pursued a referendum and relentless legal battle following the City Council’s approval of the project.

“Today’s decision supports the rights of Californians to have a say in local land use decisions, whether through the process of updating a city or county’s general plan or through the initiative and referendum process,” said Robert “Perl” Perlmutter of Shute, Mihaly & Weinberger LLP, attorney for Orange Citizens for Parks and Recreation. “The Supreme Court’s decision clarified key points for property owners, public officials, and the public, and should eliminate confusion moving forward if similar matters arise.”

The case turned on whether the city’s flawed 2010 General Plan allowed construction of homes at the former golf course even though it was zoned as open space.

Orange ultimately decided that it did not need a General Plan amendment because of a resolution from 1973 that permitted residential development on the property.

Even though 56 percent of Orange voters rejected the General Plan amendment in 2012, the city argued the referendum was moot because of this resolution.

“In light of the contents of the City‘s 2010 General Plan, no reasonable person could interpret that plan to include the 1973 resolution,” the court said. “Because we conclude that the City abused its discretion in interpreting the 2010 General Plan to permit residential development on the property, we reverse the Court of Appeal‘s judgment upholding the City‘s approval of the Project.”

Attorneys for the developer did not immediately respond to requests for comment Thursday afternoon.